FlowWright version 9.8 has just been released and includes significant upgrades to:

Customize the FlowWright UI with your own colors, logos and fonts.  FlowWright's UI is separated into sections, and each section can be customized.  Make changes and save them as your custom theme - or load any of the themes provided with FlowWright.

FlowWright now supports globalization throughout its user interfaces, dashboards and forms. In addition, there is a new globalization provider that uses caching to provide high performance.  Globalization default values are English (US).

When different cultures and language translations are configured, a user can now switch between these languages using the language selection icon within the UI header.

A selected form or workflow definition can be saved as template, and then, later, used as the basis for creating new items.

FlowWright includes new workflow steps with this latest release, such as steps that leverage Microsoft Azure machine learning services such as Optical Character Recognition (OCR) for recognition of forms and receipts and more.

FlowWright also provides new steps for generating  barcodes in different formats, as well as steps to recognize barcodes and their text.

In addition there are new user management steps and object "get/set" property steps. These steps help with managing  object data stored within FlowWright.

Users now can receive notifications in addition to tasks.  Notifications are displayed in the header and the user can close them. These notifications can be generated by a workflow for specific users, or created manually through the UI.

FlowWright has always supported the extending of FlowWright data tables, and now customers can extend FlowWright objects right from the FlowWright UI.   The FlowWright API also supports new API calls for getting/updating detail properties. For example, if you want to store more information against each user like “DOB”, add a table extension and start storing data.

This is an exciting new feature!  Most workflow definitions are created with steps and connections. When the engines processes a workflow, it follows the connections that are defined, but let’s say you want to jump to any step?   Now you can do that!  Jump from any step to another step, at the point of jump, a virtual connection is made and the workflow jumps from one step to another.  This customer-driven feature has already been embraced by several customers in beta.

FlowWright's User Interface includes several important upgrades.  For example, now all tables within the UI are fully responsive, they display and adjust the # of columns based on resolution.  And a user now has the ability to select what columns should be displayed for each table.

FlowWright's forms designer now allows form builders to preview forms in different device resolutions such as tablet, phone or PC.  And there is a new “grid layout” control that is fully responsive and auto adjusts to any resolution.

Forms also now fully support language translation: any form and its labels can be translated to any language supports by Microsoft Azure's machine learning translation.

FlowWright is built using Microsoft technologies, and we are moving our technology to based fully on .Net core. Given we have customers using .Net Core and .Net Framework, we have made the FlowWright backend fully .Net Standard. Our customers can fully integrate with our .Net API using either .Net Core or .Net Framework. .Net Core and Standard is the Microsoft future direction with .Net, and we are also heading in the same direction and using a systematic and methodical approach in order to support both our new and existing customers.

The FlowWright team really enjoyed building v9.8 and especially delivering the features and functionality that our customers want and need.  We hope you enjoy FlowWright, too!

Want to get the latest version of our software? Start a Trial today! 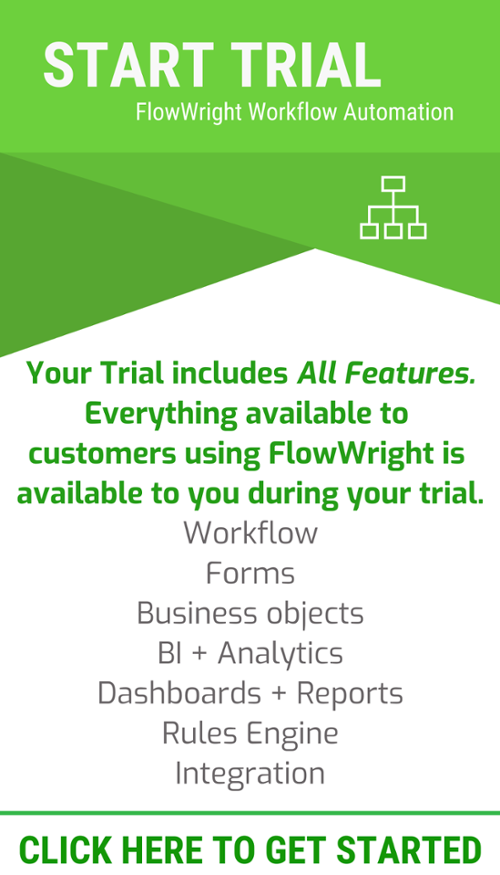