We are excited to release v9.4.1 of our BPM/BPA workflow technology, Many new enhancements and fixes to v9.4 are included within this update.  First, thanks to our customers for pushing the product to the next level, allowing us to add features that will help our current and future customers with their business needs.

Rendering of a task has 2 standard "Approve" and "Reject" buttons. Now the labels for these are fully configurable at each task.  If you are routing a Purchase order for approval, now you can call the button "Approve PO" and "Reject PO".

Previous versions of FlowWright used a layout manager for dashboards, layout manager has been removed and now the dashboard designer supports layout free, drag and drop placement of dashboard widgets.

The Dashboard also gets a couple of new widgets:

Under BI (Business Intelligence) you will find 2 new reports; these reports are similar to the previous Definition/Instance projections, but there are now two new reports will also display task configuration information within the report data.

Look-up data can be helpful in many places of FlowWright.  In data types, forms, drop down lists and many other places.  We have added a new UI to maintain lookup lists.

We have integrated with many of the online storage platforms, so new steps are available to access these platforms:

For a complete list of all of the new enhancements with v9.4.1, please look at the version history or the readme file.

Curious to know how workflow can impact your business?  Set up a demo! 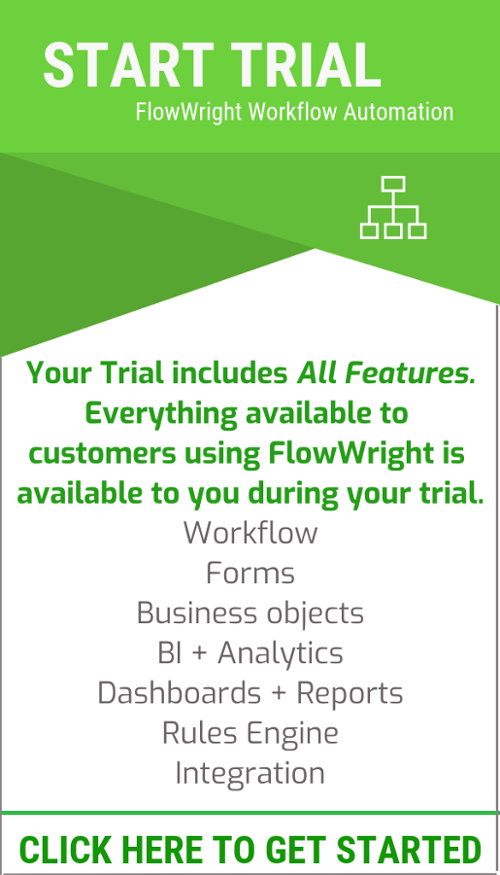